Themes in Assignment 3 Self Portrait

The shadow self portrait has deep roots in the history of art and I wanted to position my series in this context, to reference my images, not just to photographers such as Friedlander, Maier and Stielglitz but to other artists like Renoir and Monet. By connecting my series in this way I intend to access their symbolism and in particular to develop three ideas, the “shadow of the gaze”, the “shadow of the creative hand” and the “transition between reflection and shadow”. (i)

The Shadow of the Gaze 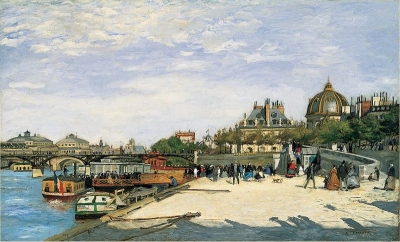 The shadow of the gaze was described by Baudelaire as the “allusive magic that contains both the object and the subject, the world outside the artist and the artist himself” (3) By using the shadows of things outside of the frame the artist extends the image to include those things and by including his own shadow the artist projects his act of observation into the frame. An early example of this approach can be seen in Renior’s The Pont des Arts where the artist’s presence is subtly added to the painted landscape. 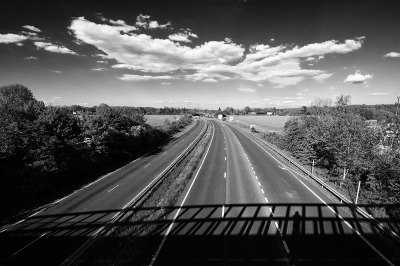 My response to this idea is included in a number of the pictures in the final series, photographs where my shadow is a minor component in the wider landscape.

It is best represented by fig.3, The Bridge Over the A31. The shadow of the bridge extends the subject matter to include a large feature from outside of the frame and the “artist” in the act of observing the scene. The use of a wide angled lens adds to the ambiguity, can the viewer be certain that the silhouette is the artist?

The Shadow of the Creative Hand 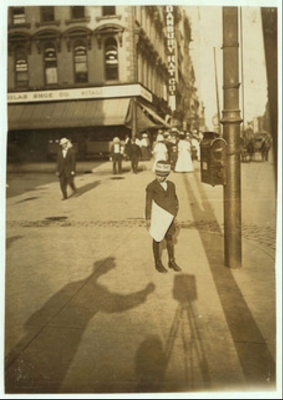 The shadow of the creative hand or of the artist’s hand is an even older concept having been in use since, at least, the 16th century.

The artist is normally hidden from the viewer, excluded from the frame but by projecting the shadow of the hand onto the surface of the representation the artist is showing the impact of the creative moment.

The act of creating the image becomes part of the image. In Hine’s newsboy the photographer remains incognito, we only see his silhouette, but he is both object and subject, we are offered the ambiguity of whether the subject is the newsboy, the photographer or the relationship between the two. 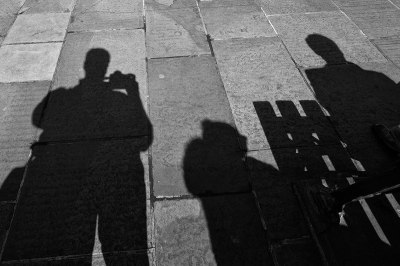 However, there are also a number of images, such as fig. 5 The Bench,  where the camera and the photographer are more obvious and provide a clear representation of the creative or artist’s hand.

The Transition Between Reflection and Shadow 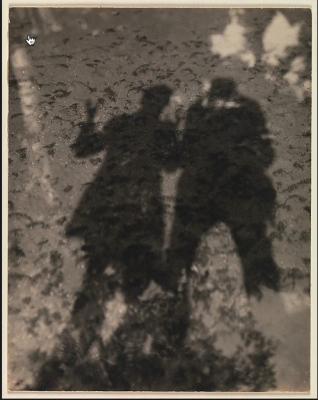 Alfred Stieglitz Shadows on the Lake 1916

The third idea that I have explored is linked to the classical story of Narcissus. Livy’s story is well known, a young man falls in love with his own reflection, but many artists have been more interested in the relationship between the young man’s shadow, potentially representing his soul or essence and his reflection. Victor Stoicha draws attention to how the transition between the man’s shadow and reflection has been historically dealt with. (1)

My interest is more closely linked with Monet and Stielglitz who both photographed their shadows on water. Steilglitz appears to have been exploring the abstractions created by the reflections on the surface of the water, his shadow and the real textures in or under the surface of the lake, whereas Monet seems to be placing himself into a landscape that he painted for many years. 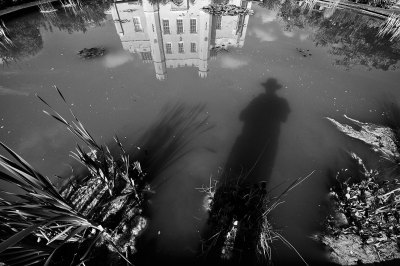 In both cases these images contain the real landscape and two referential images; the reflection of the sky and the shadow of the photographer. They challenge the conventional notion of a landscape which includes land and sky by including both elements in a single plane. 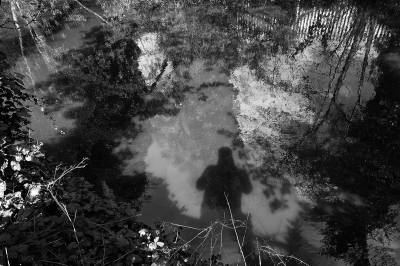 Fig. 08 The Canal at Guildford

I made several attempts to capture the same combination of elements, a landscape that excluded the sky but contained reflection and shadow.

The best result was arguably the Pond at Ditton Manor although the more abstract result and, therefore the nearest to Stielglitz’s photograph was The Canal at Guildford.

(i) An earlier essay The History of the Shadow Self Portrait looks at the historic origins and development of these ideas and the use of shadow self portrait in art.

5 Responses to Themes in Assignment 3 Self Portrait